8J1JAUS celebrated 30 years of reciprocal licensing between Japan and the United States! 8J1JAUS was operated from locations throughout Japan by TIARA members from 07 August 2015 through 29 February 2016. We will QSL all contacts via the bureau. (You don't need to send us a card.)

Background on the arrival of reciprocal licensing: 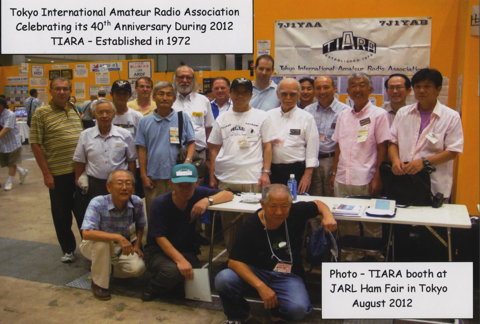 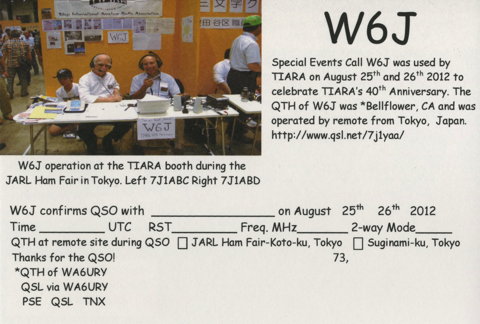 First of all, many thanks to all the club officers and both members and non-members for your support over the years. We are grateful to be able to celebrate this milestone in our club’s history.

A party was held in Ginza, Tokyo on Saturday evening, 25 August 2012. There were a lot of familiar faces, including some that are currently living overseas. Bill Stenson, 7J1AAB, prepared some closing remarks that sum up the first 40 years of the club.

TIARA at the JARL Ham Fair in Tokyo

Our booth (#J-39) at the JARL Ham Fair 2012 in Tokyo was well attended. There were a number of photos that highlighted the history of the members and their activities.

Dan 7J1ABD / WA6URY set up a remote control VoIP station using the special events call W6J operating from California. A total of 180 QSOs were made on August 25th and 26th 2012.

A QSO between 8J1A (at the Ham Fair in Tokyo) and W6J was especially memorable. Details can be found on page 5 of the October issue of morsEasia.

Commemorative QSLs were recently printed. All QSLs sent direct to QSL manager WA6URY have been answered. QSLs for all QSOs (except those already confirmed direct) will be sent via the bureau where possible.

TIARA was founded in Tokyo in 1972 with the two main purposes. The first, to establish a forum for foreign hams to meet each other and local Japanese hams. The second, to pursue the goal of foreign hams being able to operate in Japan with their own personal call sign (foreigners at that timewere only allowed to use Japanese club call signs based on rather strict operating procedure requirements). In 1985 through the hard work and efforts of many,TIARA club officers and members, the reciprocal licensing agreement between the United States and Japan was approved by the related governments in 1985. This paved the way for the issuance of personal call signs with the prefix “7J” to foreigners living in Japan. The call W6J (W6 Japan) was selected as the special events call to celebrate TIARA’s 40th anniversary and the reciprocal licensing agreement.